With recent workplace violations at Amazon, we take a look at a play written 100 years ago to see what it can teach us about the current relationship of the employer, employee and technology. 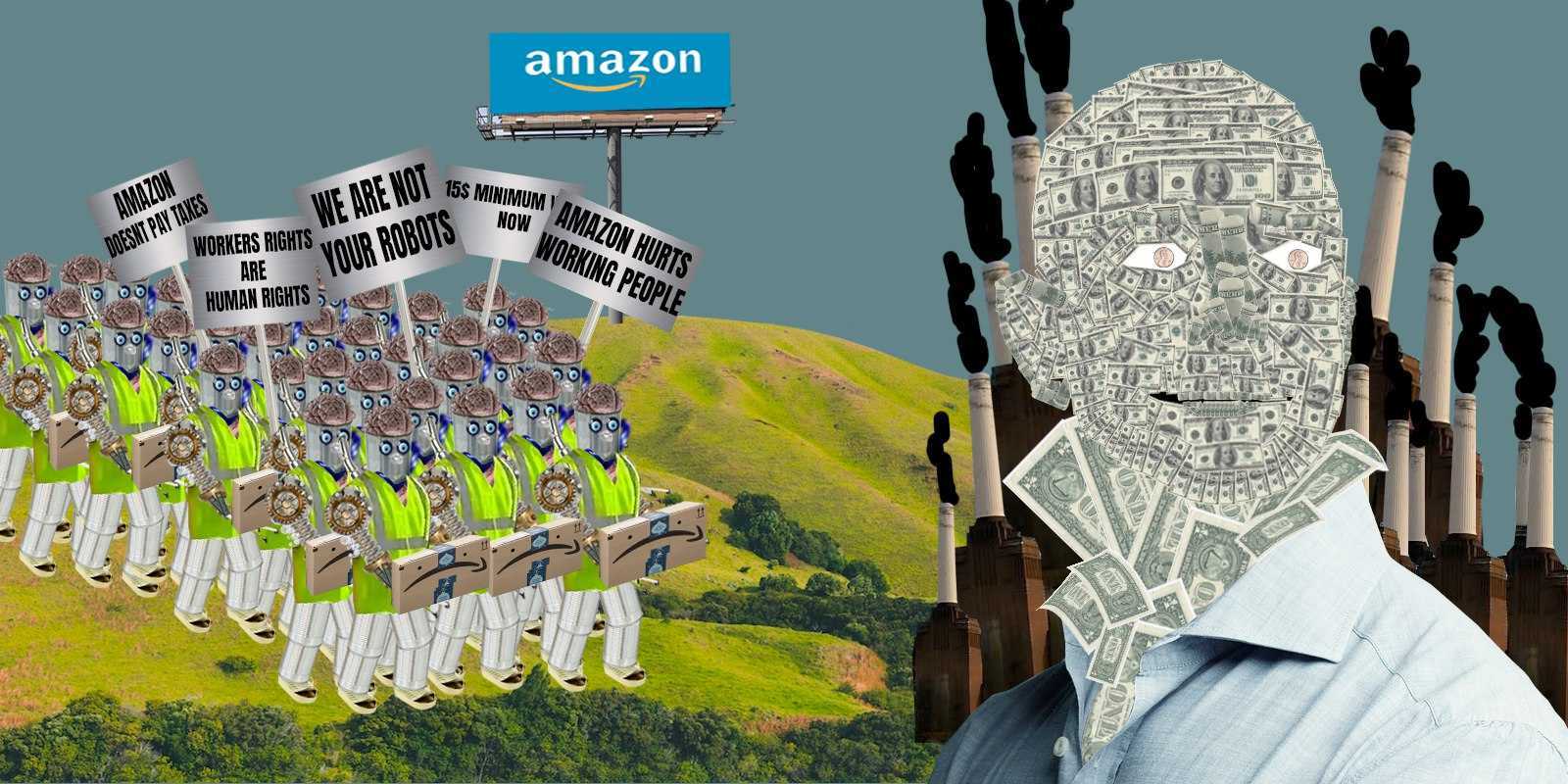 In March of 2020, Barbara Chandler went to work in the warehouse of Amazon in Staten Island, known as JFK8. Covid-19 has already made the headlines, and as Barbara clocked in, she had to meet the hourly tasks. Closely monitored and with every delay penalised, Amazon workers have voiced their concerns about the impossible quotas that are set by management. These were labeled by the workers themselves as “oppressive and dangerous” amids the pandemic. With such close surveillance and strangling workload, Barbara was not able to take proper hygienic measures to ensure her and her fellow colleagues safety. A few days later she contracted the virus and infected her cousin who was living with her. He died later that month. JFK8 will become the most dangerous Amazon warehouse facility with 90 confirmed cases.

Work surveillance at Amazon is not something new. Again and again stories were brought to light of how Amazon uses technology to improve performance at the expense of the physical and mental health of the worker. While the fear of technological improvement has been part of the subconscious of society since ancient times, it is perhaps not technology itself that is dangerous. Instead the use of it should raise alarms. To better understand this issue, we ought to look at the cultural reflections of this battleground, specifically a 1921 play by Karel Čapek named Russom’s Universal Robots.

Turn the lights out and close the curtain and let us set the stage. The year is 1918, Europe has been ravaged by 4 years of constant warfare. The smell of gas, rot and gunpowder sweeps across the fields of Verdun, the mountains of Isonzo and the vast open lands of Eastern Europe. At the feet of the collapsed Austro-Hungarian empire, a new republic rose, the first Czechoslovak Republic. The push for democratic self determination was unique for its time, as a major force for independence came not only from the army and nationalist forces but also from the trade unions.

Starting in the late 19 century, under Austrian rule, the historical Prague towns were unified to create the core center of industrialisation of Bohemia and being unravaged by the war, the industry continued to flourish. Dating back to 1870, trade unions in Bohemia have had a long history, but it was only through this succession where they have been able to gain social, economic and political influence, and with the republic being only 3 years old in 1921, the future of trade unions in Czechoslovakia and unions in the world was very uncertain.

Čapek is trying to capture this feeling in his satirical play. In the unknown distant future, a scientist by the name of old Russom was determined to create life, specifically he strived to create a new race that would be equivalent in intelligence and feelings to other people. His motive was simple, he wanted to challenge god itself. It was only through young Russom (it is unknown in the play if he is old Russom’s son or a student) that this creation was stripped of its original intent and rebuilt for industrial means. Young Russom, being an engineer, aimed to simplify life to its core industrial needs. What it meant was manifacturing artificial workers with no ability to feel and be physically superior to human workforce. Or as Domin, the central director of R.U.R. puts it:

“He chucked everything not directly related to work, and in so doing he pretty much discarded the human being and created the Robot.”

The shift between the goals of old and young Russoms symbolise a greater societal shift. It was only 70 years before the play’s first opening that the gears of the industrial revolution turned and puffed. Beforehand, peasantry and feudalism were the norm in most of Europe with only parts of the higher society remonstrating the monarchy and god itself. This slowly lost its relevance with the beginning of industrialisation and manufactured driven capitalism. In essence, these 2 scientists personify modernity itself.

These creatures, known in the play as robots, are less mechanical than their name might suggest. In the original play the robots were played by people who wore metal plates, a suggestive indication of the unity between man and machine. Known nowadays as androids, these creatures were not supposed to epitomize the societal fear of technology, but of its use. It is not the fear of technology that takes center stage in the play, instead it is the dehumanisation that is caused by its industrialisation. Specifically, the theme of worker expoilation in the play is most prevalent when the characters talk about the functionality and purpose of the robots. Such characteristics include: Having no soul, feeling only pain, life span of 20 years and having physical superiourity to humans. According to the human workers on the facility, not providing the robots a soul is key to making them be the ultimate workforce. Such a workforce, as Domin puts it, should be “the one that’s the cheapest […] with the fewest needs.”

Their short lifespan is another indication of worker expoitation that existed then as much as now. It indicates that the robots, like the exploited workers of the world, have an expiration date. Similar to work related diseases of that time, such as black lung disease, and harsh working hours in multiple industrial sectors, the idea of expiration date for the worker exists today too. It is observable in the video game industry with crunch culture and normalisation of unpaid extra work hours. Or with the emergence of burnout throughout many industries, in particular normalisation of burnout, low pay and high stress levels in SpaceXthrough the sale of the idea of historical contribution to new college graduates.

Furthermore, and perhaps the most intriguing part is the way the human factory workers justify the robots’s inhumane design. On the question of why the Robots have no souls, Dr. Gall, head of psychological and research divisions, answers:

“For industrial reasons, Miss Glory. The Robots sometimes damage themselves because nothing hurts them. […] We must give them pain; it’s a built-in safeguard against damage.”

As the Robots are seen as no more than a product and a building block of the industry, they must be contained within this realm. Meaning the human managers, caring about the delivery and performance of their product, only give the Robots emotions that would enhance their performance. That being pain.

Moreover, discussing the disinterest in giving the Robots souls, Busman, the general marketing director, gets straight to the point. As he puts it: “That would raise the cost of production. Dear Lord, lovely lady, the beauty of our product is that it’s so cheap!”

The only resistance to the production of the Robots comes from the protagonist, Helen Glory. Daughter of the fictional president Glory, she comes to visit the production Island in hope of freeing the robots. When put down by the managers that showing love to the robots will not yield any results, she schemes a plan with Dr. Gall to give the Robots a soul. A few years pass as we get to the second act and the climax of the play. The Robots have now organised and are revolting against the managers. In the hilarious chaos that ensues, Busman busies himself with calculating the company’s losses and the others come up with a business plan to sell Russom’s manuscript of Robot manufacturing to the Robots.

Striving for power, or having a god complex, the managers of R.U.R. have created a worker whose purpose is to serve the capitalist system. Depriving it of all humanity and of its very soul, they attempted to reinvent productivity. It comes as a warning to us both as workers and as a society. Management and agents of capitalism have and will always put profits first. The outcome of such endeavors results in the dehumanization of the worker. Similar to how R.U.R.’s psychological department stripped the Robots of all ‘unnecessary’ emotions, management does that today too. By creating an office culture in which small talk is the only ‘welcomed’ form of conversation, management deprives the worker from expressing work issues regarding mental health, payment comparisons, sexual assaults, discrimination and many more. Even going further and creating human resources department meant to protect management from the employees.

Not only through emotional suppression does modern day capitalists make R.U.R.-like Robots out of modern workers, but also through technological use. The Robots of R.U.R. are superior to human labour because they are designed to outperform them. However, as a robot/android slaveforce is not yet available, management is using every surveillance technology available to maximize performance. Such practices can be seen in Amazon, food delivery companies as well as in the general tech industry. Through it workers are not seen as workers anymore. They are seen as part of the system to satisfy the shareholders. They are given impossible work hours, impossible tasks in an impossible time frame to complete them. Complaints about such conditions are being brushed off and the workers are scolded for even complaining.

As it may be, R.U.R. relevance today does not only come from its criticism of work conditions and the use of technology to take humanity away from the worker, but also it goes to show that organising works. The Robots at the end do revolt. Actisim, portrayed by Helena Glory does work and frees the Robots. Treating the worker as a robot, as a number in a for-profit equation can only go as far as the worker wills it. Like the Robots, organising, striking and facing management head first is the only option to stop and deter such practices. Otherwise we are enabling them to turn us into machines and deprive us of our humanity.